In January 2019, we (Cook, Bissinger, & Van der Donk) conducted a survey as a mini-research project as part of our first year International Pyschology BSc at Amsterdam University (UvA). The first section summarises the results of our core research into social influenceability and smartphone purchase. The second section summarises the results of the survey, which covered more general purchasing influences and how they differ between Millenials and Generation X.

People who belong to certain peer groups seem much more likely to have iPhones. For example, people that work in sales and marketing, consulting or who have fashion-conscious friends seem almost to have a strong preference towards the iPhone compared to the general population.

Previous research has shown that brand and social influence are significant factors for smartphone purchases amongst students (Rahim, Safin, Kheng, Abas, & Ali, 2016). This research looks to replicate these findings and investigate if these can be generalised to older adults.

A convenience sample of 70 adults aged 18-54 were recruited amongst family and friends to complete an online survey. The survey was conducted on Google Forms and no incentive was offered to beyond the opportunity to receive a copy of the research.

Social influenceability was measured by asking people whether they agreed or disagreed with ten statements. For example, if respondents selected "agree" to the question "I like to have the same type of smartphone as my friends" then one was added to the social influenceability score and if they answered "disagree" then one was subtracted from the score. With 10 questions the range of values were -10 (less socially influenced) to +10 (more socially influenced).

A number of general questions about features and influencers were included to mask the purpose of the result, validate the social influenceability score and make the findings of more interest to the participants.

The mean Social Influencability Score (SIS) -2.6. This was consistent across a number of dimensions, including age, gender and country.  There was no statistical difference between SIS amoungst brands using the Android operating system ( ANOVA F=0.452, p<0.77 ). 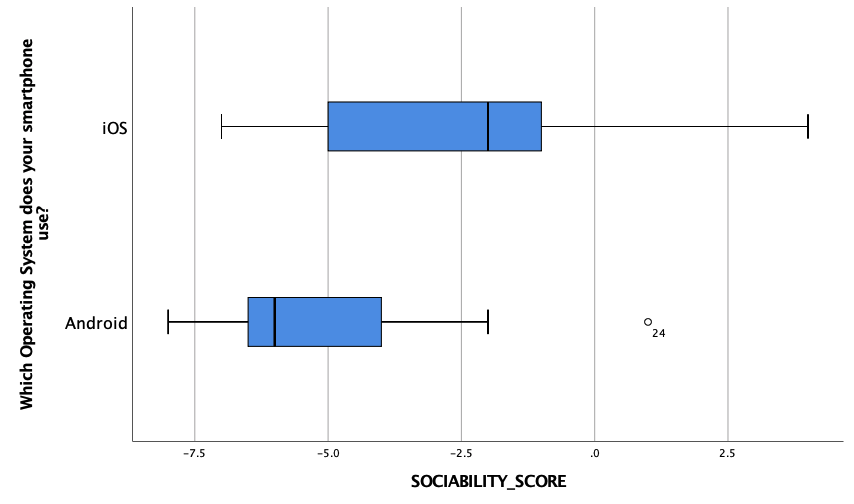 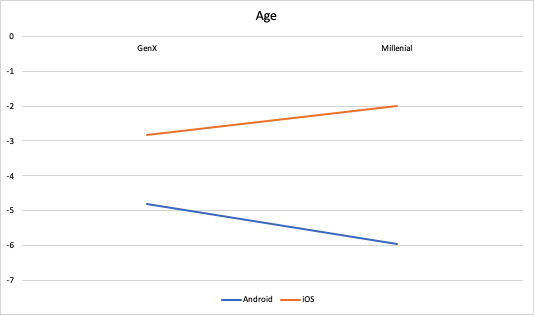 The results support the hypothesis that iPhone ownership correlates positively with social influenceability. It also supports the sub-hypothesis that iPhone ownership correlates more strongly with social influenceability for younger adults. Whilst this is a correlational study it would seem unlikely that purchasing an iPhone would lead someone to become more socially influenced. Therefore, we can infer from the results that people who buy iphones are more socially influenceable in their purchase decision.

Given the amount of money spent on brand advertising by manufacturers such as Samsung, it was surprising to find no significant difference in social influenceability amongst owners of non-Apple phones. This would infer a lack of brand sensitivity and given that Android users reported do a significant amount of research, marketing money would perhaps be better spent on providing practical online information resources that highlight the features and benefits of their phones.

Whilst the statistical significance of the results was high it is appropriate to advise a degree of caution in their interpretation. Firstly the sample used was systematically biased, with 44% of respondents having iPhones compared to 28% for the population (http://gs.statcounter.com/os-market-share/mobile/europe).  Further research with a larger sample, recruited randomly would improve generalisability. Secondly, the method used for measuring social influenceability was fairly arbitrary as no standardised measure exist. The SIS also relied upon explicit self-report, whereas such influences are likely to be relatively subconscious. A robust methodology for measuring social influenceability that includes an Implicit Association Test could be a topic for further research alone.

The Millenials surveyed spent a third less than Gen Xs  (€483 vs €718). The Millennials seem to be shunning the big 5 brands, in favour of cheaper alternatives. Samsung had almost half the market share amongst the millennials than it had for Gen X whilst Apple's share was 22% lower amongst the Millenials.

Friends come at a price

Cost no issue for Iphone owners

Thanks to streaming services it seems people no longer feel tied to Apple for access to music. Music was rated as the least important factor in the purchase decision for Gen X. As far as Millenials are concerned, iOS no longer seems to hold an advantage in terms of ease of use. Most Millenials rated usability as unimportant, although it is still a factor for Gen X, correlating strongly with iPhone ownership.

Using regression analysis, we found that people that spend more money on their smartphone are more likely to agree with the following statements:

People that choose an Apple phone  are more likely to agree with the following statements:

When it comes to researching which smartphone to buy most respondents asked a friend. After that, Android purchasers tend to do a lot of online research, stating Online Customer Ratings as their most favoured resource, iPhone buyers seem far more confident that their phone will offer superior features and their preference for Social Media suggests that they are more interested in finding the phone for their image.

Given how similar Android phones look and how little room there is for branding on a smartphone, it is perhaps not that surprising to see how little importance respondents attached to brand. Android purchasers want to get the best-fit smartphone for their budget and a significant amount of that research is done online. The smart place for smartphone manufacturers to do their marketing is online because that is where consideration takes place. The easier they make it to identify best-fit products and to compare alternatives the better it will be for everyone.

Are we fit to drive?